They say that humans always carry the weight of all of our fears on them. I have yet to meet any long distance hiker who would disagree with that statement.

Before packing for my 600 mile round trip to Big Sur, for some Motocamping, I began by thinking of all the weather possibilities that I might encounter, like rain, cold and hot weather. My original plan is to camp and cook at least one meal.

If you’re familiar with California weather, it can rapidly change by as much as 40 degrees overnight. So, I pack accordingly. I also plan on hiking. So, in the panniers go my hiking shoes, a small pack and another set of clothes.

Next, I move on to the kitchen part of camping. Why so many gadgets for such a simple heat and serve meal? We humans like to carry just way too much stuff.

If I didn’t have to eat or sleep; life would be so much simpler.

Where’s all this fear coming from? I’m not yet ready to tackle that one question yet, but, at Motel 6, in Morro, California this weekend they wanted $197.00 for a 1960’s era room. Fear of getting ripped off.

Just a few short months ago, during COVID-19 they couldn’t even give these rooms away.

Guess the economy is back on track but, why is hotel lodging in the US so expensive? Camping was $35 per night and five sticks that qualifies as firewood about the width of a large woman’s wrist cost $15. Are there that many people out competing for these little rooms and firewood? I guess there are.

And so why am I here now on a weekend and not a weekday when the rates are less than half? Another lesson learned.

And why does it now cost me more money to eat breakfast than it does lunch? When did this happen. Breakfast at the Ragged Coast in was $21.

Is this also more fear of wasting $$ or of throwing my money away or if a paradigm shift that I failed to take notice?

At some point on the ride I start seeing bell markers on the highway. Some have signs, not yet stolen that say El Camino Real. I now begin to wonder about the California missions, that are now easily accessible by me.

All 21 of them. If you haven’t yet taken notice. On a motorcycle, unlike a car, one has lots of time to think and act on those very thoughts.

Within an 800 mile distance between the one in San Diego and the furthest one north in San Francisco. Less than three fill ups. I could easily visit them all. How long will that take me? An extra day or two?

As it turns out I only visited two missions on this ride. San Luis Obispo and the Santa Barbara mission. Enjoy the pictures. As it was all well-worth the ride.

Below some pictures worth sharing. The first and third one is of my hike. The return trip up the hill is not for the feint of heart.

Hearst castle was opened to the public for the first time in June 1958. And if you haven’t been there then you are missing the closest thing we have in America to a true Disney castle or a Buckingham Palace minus the queen.

Imagine a time when one with money could travel to another country and buy their historic antiquities. Ship them home and then build a castle to house and display them.

He was also a significant public figure.

Hearst Castle was added to the National Register of Historic Places on June 22, 1972, and became a United States National Historic Landmark on May 11, 1976.

Hearst was always keen to protect the mystique of his castle. In 1926, he wrote to Julia Morgan (architect and builder) to congratulate her after a successful party was held on the hill: “those wild movie people said it was wonderful and that the most extravagant dream of a movie picture fell far short of this reality.

They all wanted to make a picture there but they are NOT going to be allowed to do this…”. 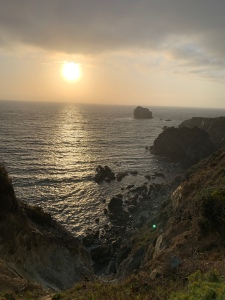 The light house is available for tours however, it’s a great catch 22 scenario. You are expected to book a reservation online just prior to the scheduled tour time however, there’s no cell or wifi coverage anywhere nearby.

Carne asada taco meal $12. And best of all the fresh homemade cooked meal in Santa Barbara is just five minutes from the mission.

Seven seas soup with tortillas and a drink. $20. Well worth it.

Fear of throwing money away? Fear of splitting lanes? Not if you want to see or visit California on a weekend.