My 1970, era Miami High School was so large, that classes were broken down into two shifts. One could choose from either a morning, 7 to noon shift or a 1 to five p.m. shift. I chose the 7 to noon option so, that I could work either, afternoon or evenings, to help pay for my new ride. When I first saw the 1926, built three story school building, it more resembled a prison, than an educational institution.

I was now fifteen years old and in need of reliable transportation to attend my new High School – Miami Jackson High School. My $100.00 Karman Ghia was too much of an oil burner to legally drive it on the roads.

In Junior High we had an elective called drivers training. I think it was the school’s coach that taught it. Six or ten students at a time would drive late model 70’s era cars around in circles on an oval course, till we got the hang of driving. Everyone passed.

My father and I first visited the local Harley Davidson dealership, to purchase, for me, a new 125 cc Harley Davidson but, since it was over the 15 bhp size limit for my age, the salesman would not sell it to us. The next size up for Harley back then was a 900 cc motorcycle. Yes, there was an era of honest motorcycle salesmanship in this country.

My father next drove me to the local Honda dealership near the airport on 36th street. Before too long, I was now the owner of a 1970 Honda CB100 – total cost, out the door was $300. My father financed my ride and the salesman gave me my entire motorcycle safety course – all in one seating.

The last motorized two wheel vehicle I rode was a mini bike I got when I was around ten years old. It came with a four horse power Tecumsheh lawnmower engine. That little mini bike was a Christmas present that cost $150. Big money in those days. It also seemed that all the kids in our neighborhood got one that year. Our only problem was finding a place to ride. Us kids solved our riding problems, by taking over a local park, with a nice asphalt oval road.

Months later, motorcycle cops chased our little hooligan mini bike riding group, out of the park, for terrorizing the walking pedestrians and their dogs. Dogs used to poop back then but, nobody picked it up. We used to step on everything in those days. Gum was usually the worse thing to get off. Dog shit was easy. You just slid the flat rubber part of the shoe across the grass and voila- no more shit!

When we all appeared before the juvenile judge, he encouraged all our parents to take away our ride.

My motorcycle riding course was less complicated than my automobile driver’s course. Like I said earlier, it was taught by the Honda salesman. It went something like this, this is how you start it, and make sure you read the owner’s manual when you get home; this lever here is your clutch, and this other one is your front brake.

Yes, you have two brakes. A front and a rear one. This is your throttle, and this is your horn and turn signals.

Soon, after starting the Honda and sliding a $25.00 helmet over my head; I rode out of the dealership, and onto a not so busy side-street, for a little practice. My riding outfit consisted of a white cotton fruit of the loom t- shirt, Levi blue jeans, and all-star converse basketball shoes. I don’t even remember wearing sun glasses or goggles that day. Getting some mosquito or gnats in your mouth or eye was common in Miami. You quickly learned the benefits of only shutting one eye while riding. Yes, I was a quick learner.

About fifteen minutes later I was ready to tackle the ride home on Miami’s busy 36th street, towards 7th Avenue, near Biscayne Boulevard. My father said he would follow behind in his 1970 yellow two door Chevrolet Impala. I lost him at the first stop light and never looked back. I was just having way too much fun; besides he was too cautious of a driver.

The first day of school I parked a block away, next to other Japanese built motorcycles. I immediately had three new riding friends; that also rode a motorcycle to High school.

I suppose we all looked cool carrying a helmet to class. Tough guy – you bet! My first period class was now typing. Yes, they taught typing in high schools back then, on IBM Selectric II’s typewriters. You backspaced to correct your typing errors.

I never seemed to arrive on time to my typing class. Girls around me always supplied me with typing paper to use. Not many guys took typing. Probably why I signed up for it.

“Can I have a ride on your motorcycle, girls would ask me?” “Only if you buy yourself a helmet, I’d reply back”. This was soon followed up with a good laugh. Right before class one day one of my new friends taught me how to wheelie. The kid was so talented he could ride sitting backwards. I could also stand up on my bike while holding onto the handle bars. Wheeling I later found, is also one of those perishable skills. You don’t practice it, it goes away.

Thanks to those early developmental riding years, I became the motorcycle rider that I am today. 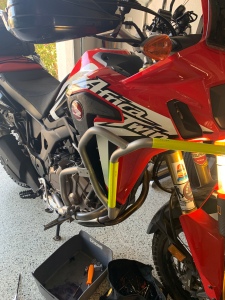 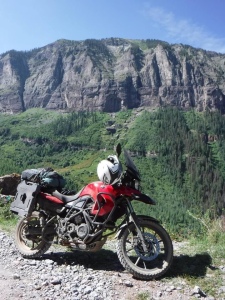