Imagine your self, traveling to one of our National parks and stumbling upon three astronauts, from over 50 years ago, just like in the 1968 film titled, Planet of the Apes.

It’s now February of 2021. Before everything gets back to normal, let me point out that during the past six months I’ve been lucky to travel 10,000 miles, on my new motorcycle.

One of those places I visited was Trona, known for the Trona Pinnacles. It’s her where the first of the many planet of the apes movies was shot. The other ape movies and years shot are below.

Some of these movies are absolute duds so don’t just plan on watching them assuming I know what I’m saying. Others are so good that they surpassed the original movie. The original movie started Charlton Heston, as astronaut George Taylor and a sexy long legged brunette, that continued to keep men’s interest in watching.

The movie opens when Heston lands on a strange, uncanny planet – a planet that for the past few years ………..

Planet of the Apes – “Get your hands off of me you damn dirty ape!”

Beneath the Planet of the Apes

In this new world of 1991, a spaceborne illness has wiped out all our cats and dogs, leading to apes becoming the humans’ new pets of choice.

Battle for the Planet of the Apes – this film showed Caesar and his forces finally winning their freedom. Towards the end of the movie, Caesar decides to end the vicious cycle and spare all humans. Big mistake. The two races now live together as equals. Man without war? Not possible.

Rise of the Planet of the Apes (2011) – technology has now caught up with the movie making industry.

Dawn of the Planet of the Apes (2014) – The closest to what I call the covid sequel. In this sequel it shows the ape population continuing to grow more organized and self-conscious, while the human population draws closer to extinction.

War for the Planet of the Apes (2017) – Probably the best of the ape movies, in my opinion.

Trona Pinnacles was used in the original film to portray life on a futuristic planet, where apes are the dominant species and humans are the endangered ones. Thanks to the scientific community and thinking adults we were able to turn that one around.

Apes now walk, talk, all look about the same, and probably even vote, as they seem to also have a class and political system in place.

The pinnacles possesses one of the most unusual geologic wonders in the California Desert. These pinnacles of which there are hundreds all around, are up to 140 feet tall; formed with calcium carbonate – they are spires of rock that rise from the bed of Searles Dry Lake basin. They formed underwater between 10,000 and 100,000 years ago.

Soon after the movie was completed the Department of the Interior added this location to their list. Star Trek also used the location for some of their movies.

There are two main ways to get there. The easiest is to head along State Route 178 for about 20 miles east of Ridgecrest, and just on the southwest edge of the town of Trona.

There, a Bureau of Land Management sign will mark the turn-off onto Pinnacles Road/RM143, and the pinnacles themselves are almost exactly 5.0 miles to the south.

The nearest food, water, and fuel is available in the town of Trona. 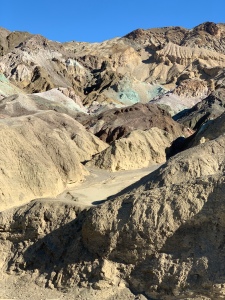