Cherish your yesterdays, dream your tomorrows but, live your todays. ~

Part 1 – They say that adventure, comes to the adventurous, and perhaps we were. For me, our Sunday rides lasted close to nearly four years. About as long as some relationships.

Today is New Year’s Day 2008, it doesn’t seem to matter much, to those that towed a trailer for hours to ride. Meet up time is 0800, nearly every Sunday of the year unless, it’s race season. Then we add more ocean training days and time.

If you show, you ride; and what’s the worst thing that can happen to anyone; a breakdown, on the ocean. The first rider that sees you, now becomes your tow, you are indebted to this person for life, breakfast, lunch, or a future tow, whichever comes first.

If you ask me how long we ride for, I’ll simply say, until the fuel buzzer alarm in the jet ski comes on. At wide open throttle that can be around an hour to suck down 25-30 gallons of premium fuel, depending on one’s brand (Seadoo or Kawasaki) so long as it’s supercharged.

When you ride with a group, there are people that come and go but, the group still functions much the same, as long as someone is still putting in the effort of scheduling new rides.

I’ve met so many people riding, that now I wonder, if I’ve given as much as I’ve received–some shared thoughts, insights, kind gestures, or simply a great moment in time.

We often move into, and out of, each other’s lives, ever so briefly. We are like ships that pass on the ocean.

I don’t feel sadness or even nostalgia, at the many unforgettable people and experiences we shared. Everyone that comes to ride, and continues riding with the group, eventually morphs into what we become, salt of the earth fast boaters, for we are what the shore people refer to as, the dirt bikers of the ocean world, or the snow boarders of the ski slopes, or even the bull riders in the arena. 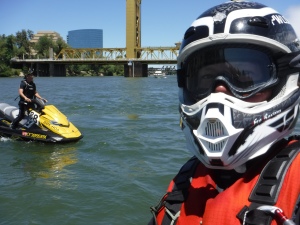 Why challenge oneself, and on a Sunday? Shouldn’t going to church be/feel more appropriate? Church probably feels like it might be better for my soul but, I can’t find this great ocean fresh air, just anywhere. Sundays are now our way of connecting to our religion.

Every ride we go on teaches something. It’s usually up to us to figure out what that lesson is.

On most rides I learn more about my body; how much pain can it handle after a few hours of riding, in a jockey like position; aboard a mechanical horse that constantly wants to go faster. It’s only control is one throttle finger. No brakes, no saddle , and no stirrups to hold one from flying off either.

Yeah, this is way better for my soul, mind and body too! To find any kind of balance in life, all three are needed.

A month into the new year. Nearly 10,000 miles on a new motorcycle I purchased less than six months ago.

My riding friends are all now on new motorcycles. Yesterday, (Saturday) the groups founder, Kevin, aka Coach, put out the announcement for a ride out to Joshua Tree National Park.

Surprisingly, only five, including Coach, showed up to ride. Three on sport bikes, including one Ducati, with only 65 miles on the odometer, ridden by a 69 year old.

The fact that Russ is sixty nine and still riding is now impressive to me. They say there is strength in numbers; riding with better riders makes it so.

In the early morning hours of January 29, 2021, the two available members of Bike Bros, MotoCamping group (Coach and Trawlercat) met up at a Farmer Boys…….Amidst the foggy haze now engulfing a five mile area; we find sport bike rider, and retired CHP pensioner, Tony, trying to warm up from his ride from Temecula. Tony was still on daylight savings time, arriving a full hour earlier, in a moving fog bank. ……before our very eyes, the full sun now shone, with endless visibility. Awesome day, food, friends, ride. It just doesn’t get any better than this. TY Bike Bros.

On this Sunday, we ride out to Cooks Corner following a deli style lunch at a grocery store nearby. Earlier we stop to visit To, (pronounced Tow) a 70 year old who at one time had a fifty Honda motorcycle collection.

Here is to 2022, when we hope To will become our Vietnam tour guide as we zip across the landscape on Honda 110/150 cc bikes.

Cooks is packed with Harleys as far as the eye can see. The crowd is supposedly friendly but, too many people for my covid comfort level.

Cooks Corner has been serving up grub at the entrance to Live Oak Canyon Road in Orange County since the 1920s. They were even a bar back when prohibition ended in 1933. Back then this part of Orange County was out in the middle of nowhere, not so today. The area is slowly being surrounded by tracts of homes.

One day they’ll be two dates on your tombstone and all your friends will read’em but, all that’s gonna matter is that little dash between’em. – K. Welsh