Hank Williams became an early Shelby customer when he forked over $6380.00, for a 1965 Cobra, powered by a 289 cubic inch, Ford V-8; a car he still owns today. His story brought back memories of my ’65, only back then I hated Fords with a passion, so I bought a Chevrolet Corvette. 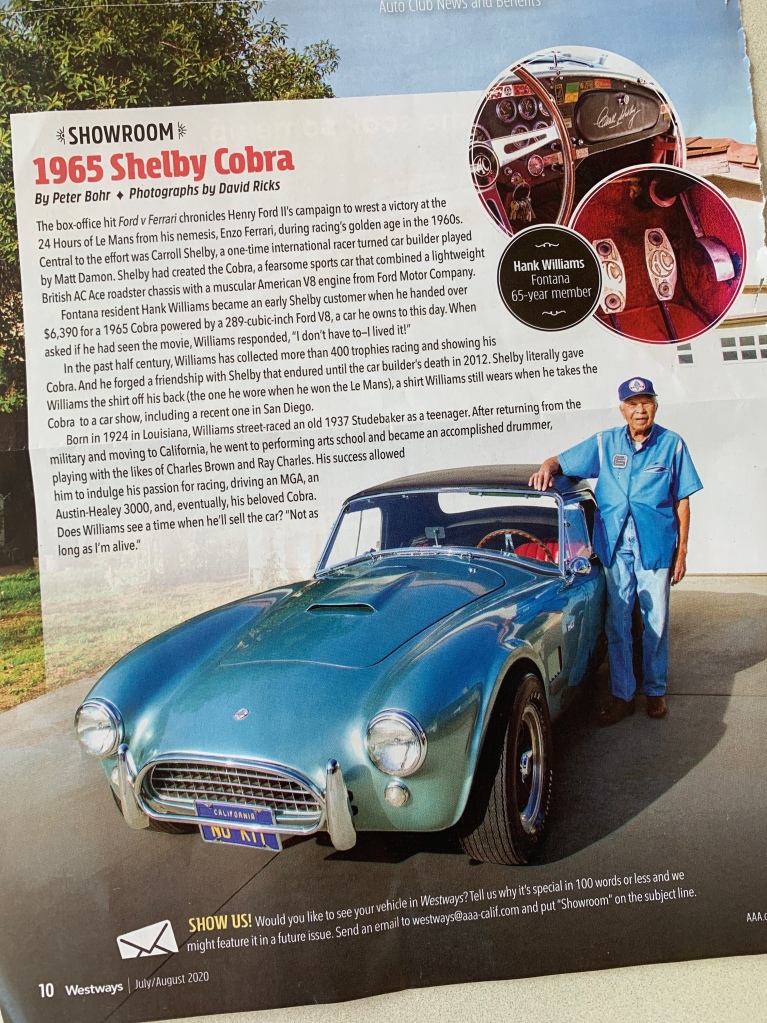 Hank was born in 1924, in Louisiana and after returning home from the war and moving to SoCal, he enrolls himself in performing arts school; becoming an accomplished drummer, with the likes of Charles Brown and Ray Charles.

I never met Hank. His story arrived to me by way of AAA. My story is also much different than Hanks. At the age of twenty five I hand over $500 cash and finance the rest ($7k) from my credit union for a Canadian owned 300 horsepower black, 1965 Chevy Corvette Stingray, with a 327 cubic inch, V8 with original factory stock side pipes. I just wanted for once a cool car. I never really planned on keeping it long.

Since the price of insurance and the wintertime weather in Spokane, Washington both work against me, I would park it, up on jack stands, winterize and cover it up-for roughly six months of the year.

My daily driver was another fifteen year old car, a four door Chevy Impala with a 396 cubic inch engine. In the late 70’s I paid $500 for it. Gas was cheap and so was insurance, tires, and any other part that broke.

Today, I now know that my Impala was the highest selling Chevy ever. It has the honor today of being the best-selling car in America in a single year: It sold over one million cars back in 1965.

After an enlistment in the USAF, nighttime classes on base and the local community college, I started attending Gonzaga U., under the G.I. bill, while also enrolled in the ARMY ROTC program, the Army Reserves, and add to that a real job.

Today, there’s allot of stress out there by way of Covid 19, but, once you get in a cool car and start driving, all of it , just goes out the open windows.

One thought on “Hanks Cobra/Ralph’s Corvette”