While I was walking the Camino de Santiago, at times, I thought of not just about Spanish history but, of my American history. I kept trying to make sense of it like for example, during the time of the U.S. Great Depression.

As I continued walking, in my own mind, I wondered, were pilgrims still walking the Camino during the roaring 20’s and 30’s, the Great Depression; or is this when the camino fell out of favor?

The U.S. at the time was the only industrialized country in the world without any form of unemployment insurance or social security for its people? We were a new country back then. And in Spain, pilgrims walked the camino for something like 1,000 years.

And, thanks to the gold standard, where our currency joined the world’s currencies in a fixed exchange rate. We helped spread the “pain”, throughout the world, especially in Europe.

Today, we are still paying Europe back; in the form of tourism dollars. If you recall in the book, “The Grapes of Wrath” by John Steinbeck, it tells the story of the Joad family and their “walk” from the dust bowl of Oklahoma to California.

The Joad family structure and family members changed as they continued their travel seeking a new life.

Looking at photos today, taken during the time of Americas Great Depression you can almost feel the raw emotion and drudgery of what life must’ve been both on and off the farm.

Something similar was going around in my head at the time that stopped me. Suddenly, up ahead I spot this 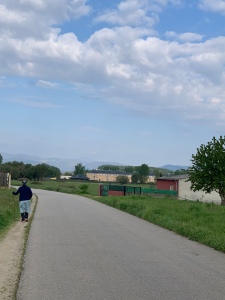 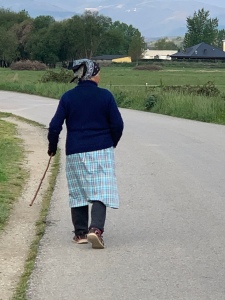 old woman. I pull out my iPhone, look at it and quickly frame the picture When I catch up to the old woman, as I walk by, I ask her in Spanish, if she recognizes this woman?

Her eyes suddenly light up; as she recognizes herself! A huge grin engulfs her face. I notice but, a few teeth. Still, she is beautiful. A country grandmother.

She embarrassingly tells me, you are “muy amiable” and reaches over to offer a friendship hug. The word amiable implies that one is good natured, and has qualities that make one liked and is cheerful and helpful.

I could not have received a finer compliment today. This was a simple moment but, one that touched my very soul.

The camino was once again doing its magic of mind, body and soul.

Throughout the 1920s, the U.S. economy and the nation’s total wealth doubled. These years are today known as “the Roaring Twenties.”

But, on October 24, 1929, as everyone began selling their overpriced shares en masse, it caused the stock market to crash. That day became known as “Black Thursday.”

As a result our industrial production dropped to half, homeless people became more common and food rotted in the fields while people starved.

By the start of 1930, severe droughts in the Southern Plains brought high winds and dust from Texas to Nebraska, killing people, livestock and crops. Enter the Dust Bowl.

By Inauguration Day (March 4, 1933), every U.S. bank closed among the fourth wave of banking panics. The U.S. Treasury couldn’t pay all government workers.

FDR (as he was known) declared “the only thing we have to fear is fear itself.”

These photos are but, a lasting legacy to my camino.