The last time I stood near this very spot, the year was 2011. I remember spending roughly a year getting ready to thru hike the PCT. Looking back today, I now know that I wasted both, allot of precious time and money in getting myself ready.

Yet, I still started out the same way as most other do. Carrying way too much weight, and not adhering to my own rules of walking at my own pace. From the PCT, Southern border terminus I walked with a guy that went by the trail name of Moose. Him and I stomped down those first twenty miles right back to Lake Moreno, the location of the 2011, PCT kickoff.

I was roughly carrying 45 pounds, including food and water. Blisters on top of blisters is what I got for not paying attention to my feet.

My timing back in 2011 wasn’t quite right. I was off, by say anywhere from a full year to almost an entire decade.

Later that year, in 2011, at Kennedy Meadows, 700 miles later, us thru hikers, all stalled. Mr. Ranger said we could go no further, on account of the worst snowpack in ten years. The trail was obliterated and would not begin to thaw enough for several weeks; I was impatient, perhaps my biggest downfall.

Today, I look back and wonder what my escapism was all about? What was I doing this thru hike for? It all sounded so easy. Wake up, hike for 15-20 miles, eat, sleep in the woods, one week later, walk to a trail town nearby, pick up my food/ supply box for the next week. REPEAT.

A decade later, on another thru hike, only this time it’s called a pilgrimage, by way of the Camino de Santiago.

In contrast to the PCT’s 2,650 miles, a walk across Spain is a walk in the park; no need to carry it all on one’s back.

The PCT, oftentimes, is a lonesome burden, with lots and lots of along time left for healing of anything that now ails you.

Escapism of which I was suffering from is something people use to avoid something. For me, perhaps my first thru hike (2011) on the PCT, I now look back and see it as my way of dealing with the death of my father, two previous marriages, some military deployments, and other work related stressors. That’s all. Nothing that us mere humans can’t handle. 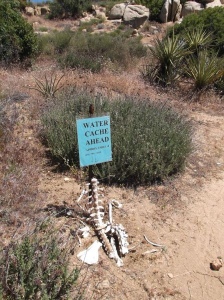 Some people deal with their escapism by drowning themselves in just their work; others do it with addictions like overeating, alcohol or drugs. Others may physically run away. This is more my style. To physically exhaust myself.

In relationships, they say that any other relationship covers up the pain of a breakup. While the person may seem to have escaped dealing with the pain head on, in reality this wound is still left festering.

It is just there, until it’s again given a chance, in a different manner, or a decade later, to properly resurface, and then heal.

It is true that just because you turn your head away from everything and pretend that everything is okay, does not mean that it is okay.

A statement I used to repeat to myself daily, during those early working years of life, just to get going was; today is the first day of the rest of my life!

Recently, I found out that there are several songs that use the same quote, “Today is the first day of the rest of your life.” John Denver recorded a song with the title, “”Today Is The First Day” and Bread recorded, “Today’s The First Day.”

So, with that in mind, “today is the first day of the rest of your life and everything will end up being alright.”

It did work during all those years for me but, …..But, nothing was solved. Both the timing and the walking part was what it took. Plus there is something spiritual on the camino that helped me through. This time it was the spirit of both deceased parents.

The Cruz de Ferro (the Iron Cross) is one of the most iconic places on the Camino de Santiago. It is traditional for pilgrims to bring a stone or other object and carry it with them to the Iron Cross. Take a moment in your own thoughts, then toss and release.

You can tell others have been doing the same for centuries given the massive mound of rocks you can climb up to embrace the telephone pole sized cruz.

While on my Camino in 2019, I personally heard amazing stories told to me about healing, relationships, and near death experiences that magically healed the person. If you have any inklings about whether there’s anything to a spiritual sense in life, then this place, no matter your religion, should be on your planned journey of life.

We all carry things that do not serve us or help us on our journey through life.

When the timing is right and you put forth the correct amount of effort – this Cross provides such a place to perform that ritual.

Step one is to acknowledge and muster the courage to deal with what you are trying to escape from.

Step two then is to find your own way of making the past miraculously disappear. And, sometimes you don’t win the first time around. You can easily see that it took me a full decade to do so.

Hiking the PCT may not feel like you’re homeless but, you certainly do look the part to others. On the Camino, you don’t need to explain anything. It’s like the TV show Cheers; where everybody already knows your name.

“Sometimes you want to go

Where everybody knows your name,

And they’re always glad you came;

You want to be where you can see,

Our troubles are all the same;

You want to be where everybody knows your name.“