Before the Trump administration succeeded in destroying Obamas policy of more open relations with Cuba, about 20,000 Americans visited legally in 2007, followed by about 1.5 million more a decade later.

“We will enforce the ban on tourism. We will enforce the embargo.” – Trump. Yet in September 2016, when Trump was the Republican presidential candidate, Newsweek magazine revealed that in 1998, Trump Hotels and Casino Resorts hired a consulting firm to explore business opportunities on the island in spite of the embargo. He was just being a good businessman, getting a jump on the competition, if Clinton succeeded in opening up Cuba.

When Obama finally did open up Cuba, it really did fuel up Cuba’s economy; after his brother Raul took over in 2008. Raul’s brother would probably not even recognize the country today, as many Cubans do own their businesses and trade and sell their land and properties.

In late 2011, Raul allowed the buying and selling of property and in 2013 he eased the restrictions on Cubans travelling abroad. From 2014 he also opened up to foreign investments; and in 2019 under a new constitution Cuba is now socialist.

Also for simplicity’s sake, the USA under the Obama presidency restored diplomatic relations with Cuba on July 20, 2015, but, left the commercial, economic, and financial embargo against the communist island in place.

“In late 1962, after the Cuban missile crisis that brought the world to the brink of global nuclear conflict, then President John F. Kennedy explored the idea of normalizing relations with Cuba by capitalizing on Castro’s displeasure that Moscow withdrew its missiles from the island without consulting him.

Kennedy asked an Algerian-French journalist, Jean Daniel, to convey a message to Castro in 1963, and Daniel later wrote that Castro and Kennedy “seemed ready to make peace.”

But the diplomatic project collapsed after Kennedy’s assassination in Texas on November 22 of that year, and former vice president Lyndon Johnson did not pursue the initiative when he took over at the White House.

In fact, suspicions abounded in some parts of the U.S. for years afterward that Cuba had had a role in orchestrating Kennedy’s assassination.” – Isabela Cocoli, VOA news, 11/26/16

Presidents Ronald Reagan, George H.W. Bush, Bill Clinton and George W. Bush maintained a foreign policy that ruled out any concessions toward Havana unless there was regime change in communist Cuba.

In October 2013, U.S. and Cuban delegations met in the Vatican, together with officials to finalize the terms of re-establishing diplomatic ties. That development managed to stay out of the public eye until December 17, 2014, when Obama and Castro announced that Washington and Havana would resume diplomatic ties.”

When my cousins and siblings finally visited Cuba, there was already internet, though limited and restricted to the locals, lots of taxi drivers, tourism jobs, and even hair and tattoo artists.

And just so we’re clear – The Cubano government is still a communist country but, so is North Korea, Laos, Vietnam and China.

The Cubano lechon is a unique and grand centerpiece of any Cuban celebration.  Perhaps lamb or goat comes in a close second. To cook it just right; the pork needs at least, eight hours on the rotisserie, depending on weight.

The way it’s still done if you want a real feast in Cuba is to place your order, well in advance, for the future celebration. 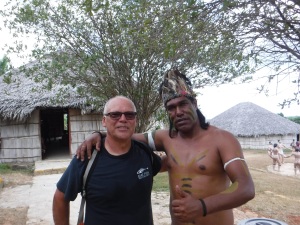 If done to traditional standards, then every part of the meal is cooked on a natural wood charcoal fire. Some places out of necessity, also make their own charcoal, out of select fruit tree trunks.

Once the cooking is completed, the pork is hung for a while, giving it sufficient time for the grease to drip from the skin, allowing it to become crisp to perfection.

Then the hacking of parts into manageable portions begins. Aproveche is announced. Something similar to bon appetit.

But wait! So what does the rest of the clan or family do, while the lechon is cooking.?

In our case we visit, we distribute presents, we walk the farm, and observe the crops growing. Soon, out comes the Cubano rum bottle.

The women folk continue preparing everything else to be consumed while the men man the fire.

Similar to how it’s still done in most every other country. In Cuba and other second or third world countries, rice for instance, is not rice until human hands sift through it. Removing, I don’t know, rocks or bugs I assume.

The yuca also needs peeling. This Cuban delicacy is not a cassava but, actually part of the agave family. The outer covering is poisonous.  When boiled it is cooked until tender, then it is well-drained. I can see now why it hasn’t caught on in popularity. Too much work.

The olive oil is then added to it, plus lots and lots of garlic, and some sour lime juice. You place it in a pan and when ready, you pour it all over the yucca.

Next comes the congris.  Congris is this black beans and rice dish however, as I noted earlier, it is prepared a little differently from town to town.

In one town, red beans are used.  And in some Cuban households, it is not known as Congris but, as Moros y Cristianos.

On this trip to Cuba, I brought several bottles of cumin, to hand out as presents. Cumin is such a key ingredient that without it, your congris rice dish will not taste or smell the same.

My Uncle Ruben taught me that if a person is successful once in Cuba, if given half the chance, he can do so again, in any Country.

In Cuba as a visitor you feel like an explorer on a mission; nothing can hurt you, certainly not the people and this is a country without snakes; dogs don’t even bark or want to bite humans.

The Cubano dogs are also on a mission, in search of food.  However, your American body in Cuba may become your worse enemy.

If you are not used to standing, can’t stand the heat, humidity or bugs, or seem to crave snacks or always drinking soda pop or water; or your body weight is such that you can’t stand for hours or walk endless steps, then a low budget travel to Cuba may not yet be right for you.

But, do not despair my friend.  High end travel to Cuba may yet again be entirely available in our lifetime.