In 1946 the San Bernardino Sun ran a full-page ad inviting people to invest in Pioneertown along with Dale Evans and Roy Rogers. On 12/14/2020, we visited Pioneertown, our first time, the desert temperatures this time of year are in the high forties and fifties.

I spoke to a local from a distance while wearing my covid mask. The gentleman cowboy made his home on main street. He went about his daily business of pounding this or that for the sake of art’s sake. He also agrees that if you are into period correct clothing and lots of parading tourists photographing your farmstead then maybe this place is for you. 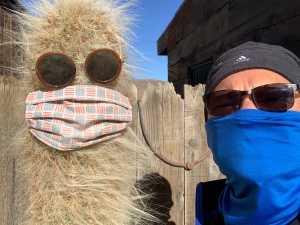 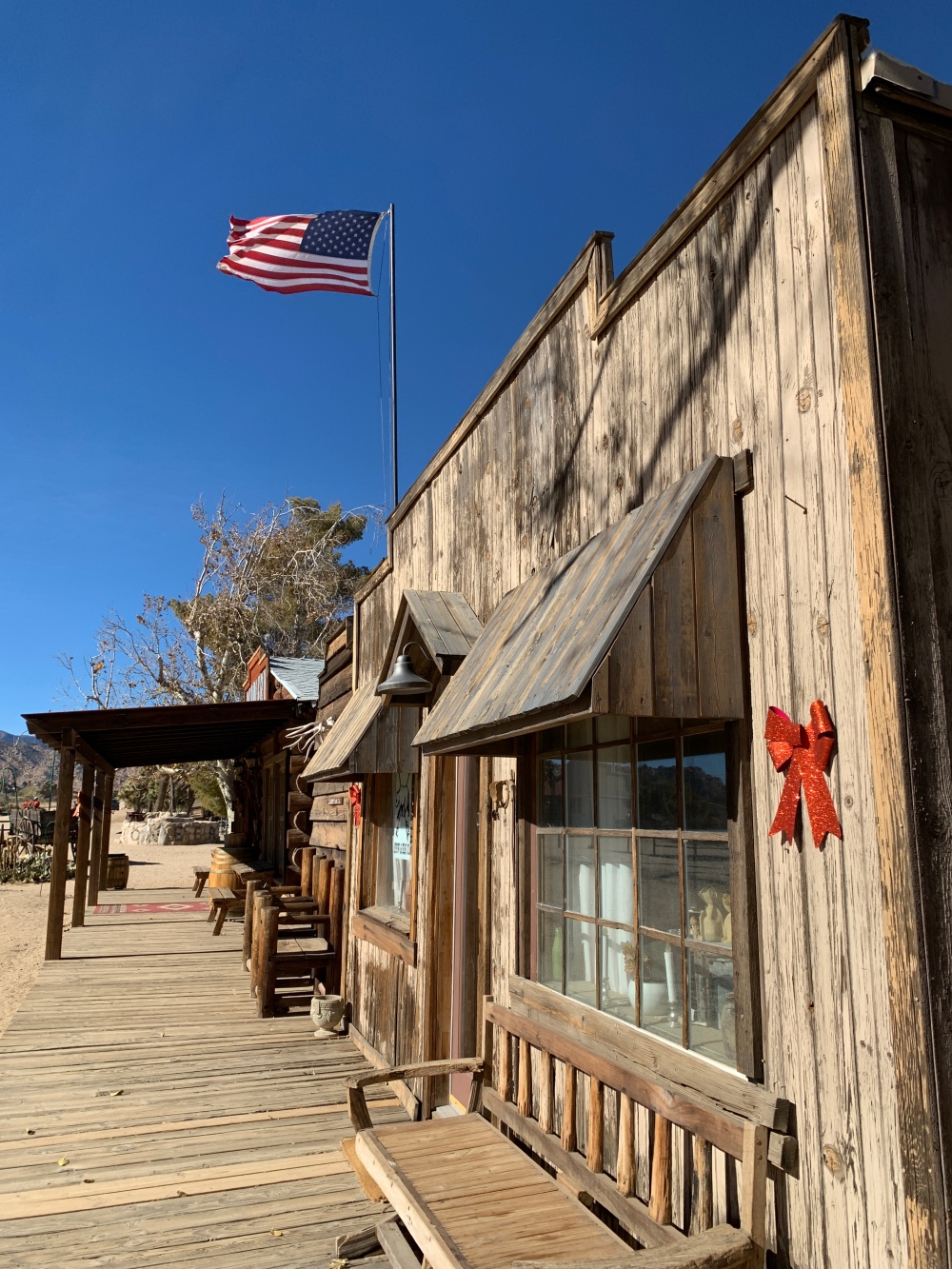 More than 5o films were shot in Pioneertown during the 194o’s and 195o’s. Maybe you recall titles such as “Cisco Kid”, “The Range Rider”, “Annie Oakley”, “Cody of the Pony Express”, “The Adventures of Judge Roy Bean” or “Buffalo Bill Jr.”

After a steaming hot cup of spicy Mexican chocolate ($6) but, it was cold outdoors and worth every penny. A couple of hours earlier we also stopped at the Windmill Taco store for a to go date shake and a crispy ground beef taco. Patti devoured the taco saying it was an 8 out of 10 on her scale of food greatness.

We walked the near empty town today but, our real purpose of the trip was to visit a ten acre outdoor museum nearby. 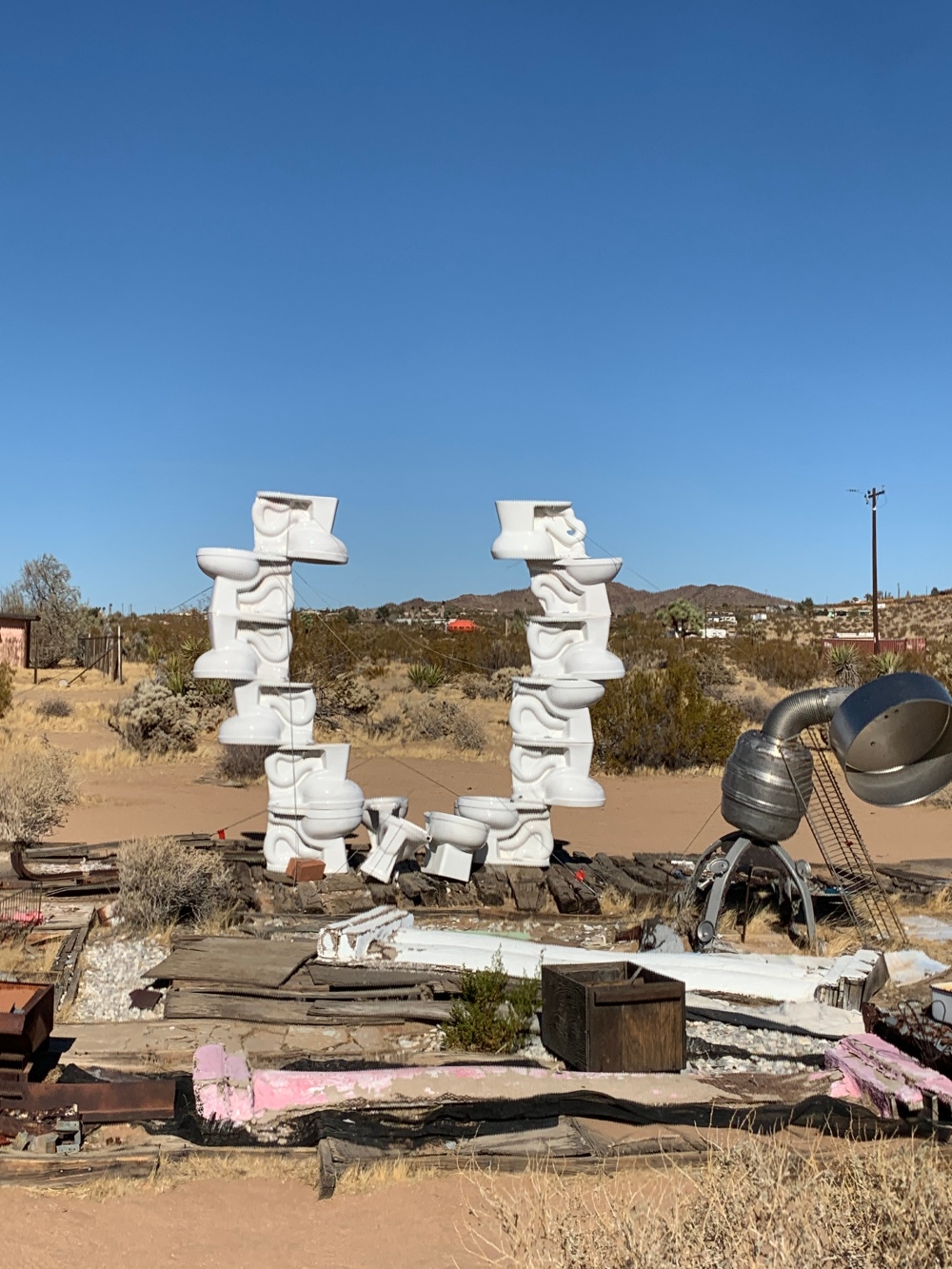 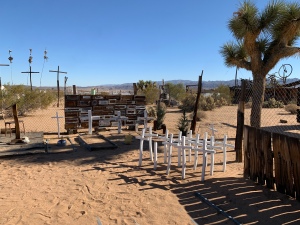 The artist Noah Purifoy was born in Snow Hill, Alabama in 1917, and lived and worked most of his life in Los Angeles and Joshua Tree, California, where he died in 2004.

In 1956, just shy of his 40th birthday, Purifoy earned a degree from Chouinard, that is known today as CalArts.

Early on in his art he used charred debris from the 1965 Watts riots. and The piece is titled 66 Signs of Neon. A 1966 group exhibition on the Watts riots traveled throughout the country.

Purifoy also became the founding director of the Watts Towers Art Center. For 20 years after the riots, Purifoy dedicated himself to using art as a tool for social change by what you see as discards of society in the pictures above.

The last 15 years of his life were spent creating ten acres of large-scale sculpture on the desert floor. Constructed entirely from junked materials.

Another great visit. It almost felt like a hike today. We each got lots of walking exercise as we were warmly bundled up for the desert cold weather this time of year.

By the time we made our way to the valley below the temperature increased to the low 60’s. The air and sunshine today was a photographers dream.