While living aboard our trawler, berthed at Rocky Point marina, on the Multnomah channel of the Columbia River I met Scott, a native Portlander who soon became my hike-companion. Scott and I explored local trails like Multnomah Falls to Wahkeena Falls, and others near Portland. Once, we even visited the little known Mt St Helens lava tubes, now known as Ape Caves. They are the third longest lava tubes in North America formed over 2000 years ago as lava streamed down the southern flanks of Mount St. Helens. It was May 1980 when St Helens blew for the final time. As the outer edges cooled, the inner molten lava drained away before hardening, leaving behind a large long tube worthy of exploring with proper lighting.

Scott lived aboard his English built 30′ Ketch, known as a Fisher that he named Stormy. He was preparing Stormy for a second attempt out of the Columbia River and up the inside passage to Alaskan waters with Ketchikan as the new home port.

While on active duty, Army Ranger Scott saw service in Panama- Operation Just Cause. Prior to Army life Scott said he owned a successful plumbing business in Portland. Scott also said he made good money at plumbing but, one day he just couldn’t take the Portland wet weather a single day more.

When he awoke, it would be raining, while on the job it rained, and when he got home, still more rain. “One day, it started raining, and it didn’t quit for four months. Scott sounded allot like Forrest Gump, the marine, in Vietnam. “We been through every kind of rain there is Bubba, Little bitty stinging rain, big ol’ fat rain… Rain that flew in sideways.”

Scott had had enough of the rain. He sold up, moving to Alaska. There not being much demand for Army Rangers in Alaska Scott returns to plumbing work. His new mission called for outfitting the remaining native homes on the Aleutian island chain with flushing toilets. The work is hard but, Scott develops a routine that offers him plenty of opportunities to explore the island chain, photographing the native wildlife.

Like a well trained sniper Scott is up early, finds his way in total darkness and from a well staked out vantage point he “shoots”. Only not with a rifle but, with a high powered telephoto lens camera. His pictures are National Geographic quality. The wildlife he prefers are white mink, foxes, or birds. Scott is hooked on photography and his assignment that will one day end.

When I met Scott he wanted my assistance in getting Stormy, a 30′ Fisher ketch from Portland to Ketchikan. The last time he attempted the same trip his first mate was a fellow ranger, not a boater.

He recalls that fateful day when Stormy was attempting to exit the Columbia River bar, as she bobbed from stem to stern it suddenly caused the English built engine to quit! Near panic set in as both war veterans now looked at each other.

There is a reason they call the place the graveyard of the pacific. Ocean waves and the outflowing Columbia river makes for hazardous condition. … Conditions that can change from calm to life-threatening in as little as five minutes due to changes of direction of wind and ocean swell.

If you know what you are doing you cross the bar during slack water or on a flood tide, when the seas are normally at their calmest.

Scott told me that when that engine quit running he jumps down below and opens the engine cover, throws down a mattress over the hot engine, separates the fuel line from the engine and blows as if their life depended on it.

Apparently, it dislodged something stuck in the fuel line. His friend swore if he survived he’d never volunteer to deliver a boat ever. Both came close to loosing Stormy or worse. This time he is not taking any chances. A brand new Yanmar engine, new aluminum fuel tank and all new hoses were recently installed.

Alaska’s Inside Passage is this watery route between the Gulf of Alaska and Puget Sound. … Along the Inside Passage, you travel protected while able to witness first hand countless wildlife in the water (whales, orcas, sea lions and seals), on the shore (bears), and in the air (eagles, raptors and many water bird life).

I remember once, hand steering Stormy, the bottom was coming up fast and we were in for a grounding. The depth meter showed the depth go from hundreds of feet to around fifty feet. I suddenly looked down at the water and like magic, the largest fish ball below that soon engulfed Stormy. We suspected orcas nearby. Then as I rounded a corner from a distance I witness this massive cruise ship bearing down on us.

Not much more excitement after that though. The daily routine becomes rather boring. Rocks, trees and water all around. You can’t really relax even though you are on an extremely slow sailboat, 5 knots maximum. We hand steered, as the possibility for encountering a floating log or other debris was very much a possibility. At night we found a safe out of the way spot and anchored. Usually in the company of other boaters.

This natural marine highway extends for more than 1,000 sea miles from Seattle to Skagway, Alaska. 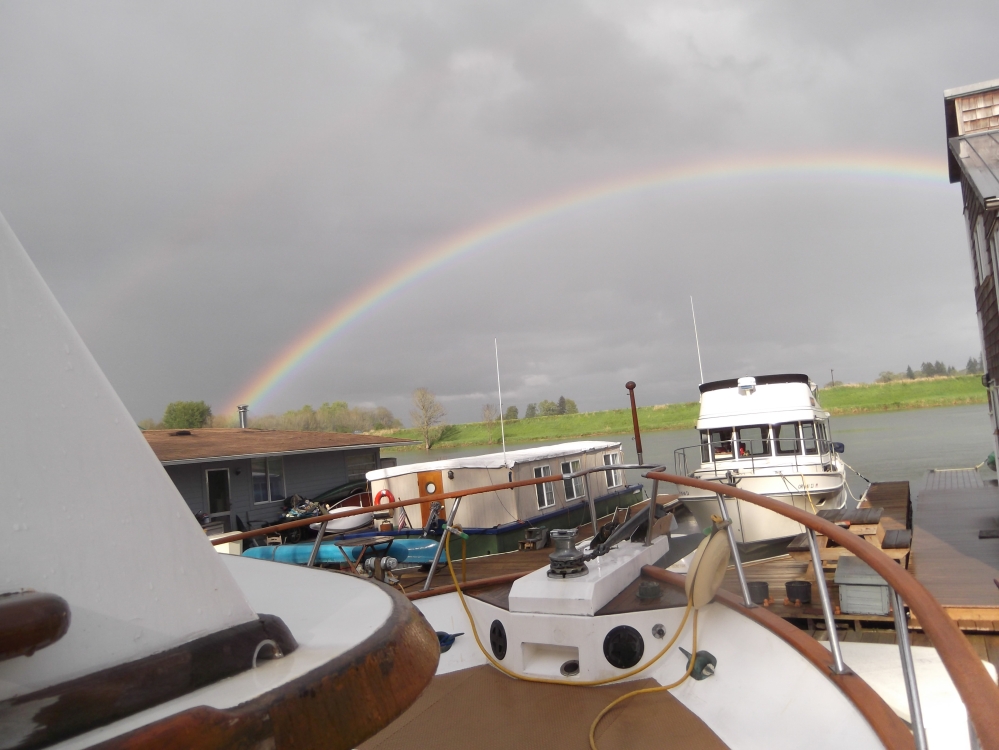 Unfortunately for Scott, he has an extremely slow boat. 5 knots maximum. Scott insisted on keeping his dinghy inflated and towed. Sort of an emergency life raft in case of a sinking. Further slowing down the already slow boat.

And like Scotts friend I also swore that I would never ever do another boat delivery on a slow boat.

“If the highest aim of a Captain is to preserve his ship, he would always keep it in port!”